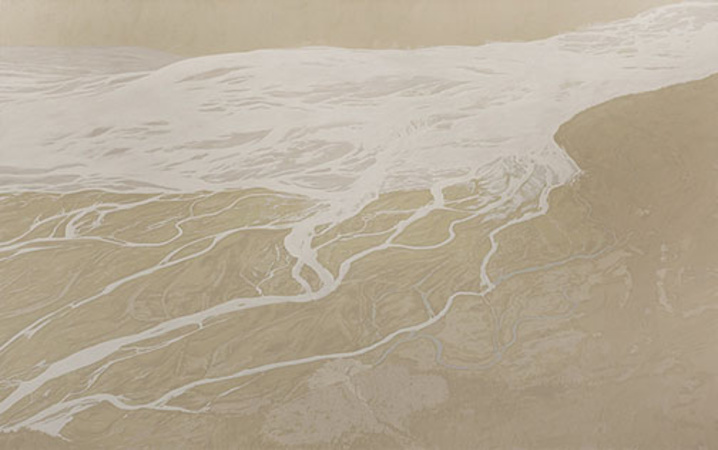 Through historical photographs, contemporary photography, painting and video, Leslie Reid explores the complexities of the Canadian North and High Arctic revealing the entwined nature of defence, northern populations, and the environment.

This exhibition is the result of Leslie Reid’s participation in the Canadian Forces Artist Program (CFAP). Through this residency, Reid travelled with the military throughout the North, following in the footsteps of her father who, as a young man with the Royal Canadian Air Force, flew photographic mapping missions in the early years of the Cold War. The first accurate maps of the North, produced as a result of the RCAF Photo Squadron’s aerial photographs, were used for both Cold War installations and economic development. The artist accessed these photographs at the National Air Photo Library in Ottawa and CFAP gave her the opportunity to take her own aerial photographs of many of the places visited by her father. Yukon and BC glaciers (Kaskawulsh, Llewellyn), Great Slave and Snap Lakes (Yellowknife) and the plateau and coast of Cornwallis Island (Resolute) can be seen in both Reid’s and the historical photos. From these experiences, Reid has created multifaceted works that are both exploration and palimpsest, uniting past and present.

In considering the time span of sixty years between these two bodies of photo works and the paintings that unite them, the exhibition looks at several intertwined issues, past and present: displacement, refuge, survival, fragility and resilience, of places and peoples, and our relationship with the earth. The changing role of military activities in the North, especially with regard to arctic sovereignty and the underlying push for commercial development are important undercurrents but the environmental effects of global warming on the North are the most critical and urgent of all.