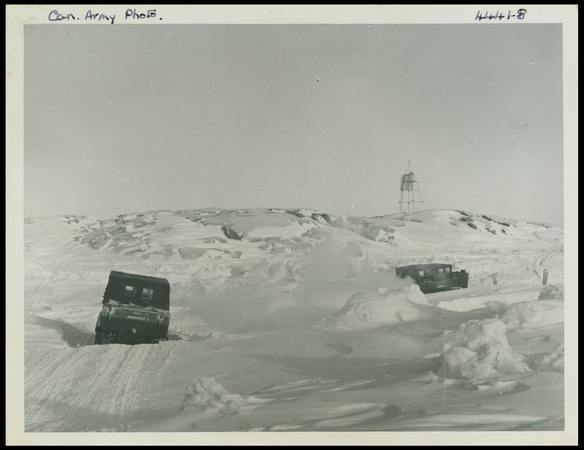 The Cold Before the War

1946, the Canadian Forces undertook what was then the largest and longest military trek into the North of our own country and the first mechanized crossing of northern Canada. During Operation Muskox, nearly 5,000 kilometres were traversed over five of the coldest months of the year. The operation was meant to test both machinery and military personnel in the harshest of climates, requiring the cooperation of Army, Navy, and Air Force and civilian observers to develop practices for northern resupply by air and push northern navigation to its limits. Operation Muskox laid the groundwork for Cold War installations and what have now become annual sovereignty operations in Canada’s north. Now, as in 1946, cohesion between Army, Navy, Air force, and local knowledge (now the Canadian Arctic Rangers) are necessary for successful northern manoeuvres.

Operation Muskox set up in Churchill, Manitoba on 29 December 1945. After extensive preparations the operation headed north on 15 February 1946 to Baker Lake, crossed the Northwest Passage to Victoria Island then headed back south through Kugluktuk (then Coppermine), along the Mackenzie River and onto Fort Nelson, ultimately arriving in Edmonton, Alberta on 6 May 1946. The Cold Before the War follows along this same trek using photographs provided by the Arctic Institute of North America and offers insight into subsequent operations and developments in the places touched by Operation Muskox.

Thank you to the Arctic Institute of North America (AINA) for providing the material and knowledge to make this exhibition possible. Most of the text found in the exhibition comes from the AINA archives and the research of Adam Lajeunesse, SSHRC Postdoctoral Fellow at St. Jerome’s University and research associate at the Centre for Military and Strategic Studies.

This exhibition was inspired by the work of Leslie Reid in the exhibition Mapping A Cold War.